NOT Happy with SHAW TECH SUPPORT!!!!!!

ok people , My problem is very interesting one. Lets run down from beginning of issue.

1. We start to have intermittent internet from december 28. Almost no internet whole day then 5 min some time some time 2 hours.

2. Called shaw and reported it. Shaw said its outage for first two days. I said fine. Then i pressed them do you have outage or this is some other issue? After pressing many csr one said it could be cable issue we will send technician on Jan 4.

3. After arguing with them , i got them to send technician on Jan 2.

4. He basically went on his own procedure and replaced all the cables and stuff. i was with him whole 2 hours. He replaced cable from street level and replaced all connectors. Also asked him to check any short circuit. He checked signal and signal is strong inside house. And replaced modem as it was dead

6. Again after frentic calls to shaw to get them send one Senior technician. He has nick name rick. He did not give his name or phone number.

7. He went through covid procedure of making everyon in house wear mask. I said ok. Then he checked signal on wall and said no signal

8. Then he opened outside box and found cable black plastic and shield melted. Then he run away from box 10 feet and said no one go near box and house may be in fire and call BC hydro. He said he worked 20 years and never seen anything like that. he probably never had electric shock it seems in that 20 years. Probably running away from Tougher work. Worst ever technician i ever seen in my life.

9. So we called BC hydro emergency line. Bc hydro came 1 hour later as they were busy. Technician waited for 30 min and gone. He talked bc hydro and i heard he left his number to call.

10. Hydro came and checked all ground wires and said there is no issue with ground or neutral wires.

12. I called shaw at 4.00pm and asked for update and what is the next step

13. They told me they are waiting for go ahead from bc hydro to work in the house ...

It could be anything but there is one thing i found from shaw is that they dont put sleeves around their metal connected. if it touches any live wires its gone.

I blame shaw for not putting sleeves around their metals. if its in its own box then its not issue. But when its around all the telecophone and telus cables.. they need to isolate their cables from others.

I feel its shaw poor cabling caused it or streel level infusion into house. No one knows until the problem solved

Because shaw is not doing trouble shooting , i am thinking of all possibilities. There is no issue inside house. Nothing burnt inside the house.

I google coaxial melting. Most comes with neutral ground...

I google coaxial melting. Most comes with neutral ground issue. But BC hydro says there is no issue with house.

Did you see inside the Shaw box on the house, was the dro...

@LivingGod Did you see inside the Shaw box on the house, was the drop line connected to a ground block? Other than your modem, do you have anything else connected to coax inside your house? It may require an electrician to diagnose.

Cables come from street that joins in the shaw cable box...

Cables come from street that joins in the shaw cable box outside melted.

Based on google search it seems like its shaw problem as...

Based on google search it seems like its shaw problem as hydro gave clean chit to wiring neutral and ground. They removed all the meters and isolated everything to check. No voltage on those shield and ground. Then how it melted. There is no fuse blown inside house. So only fuse could be in shaw side. 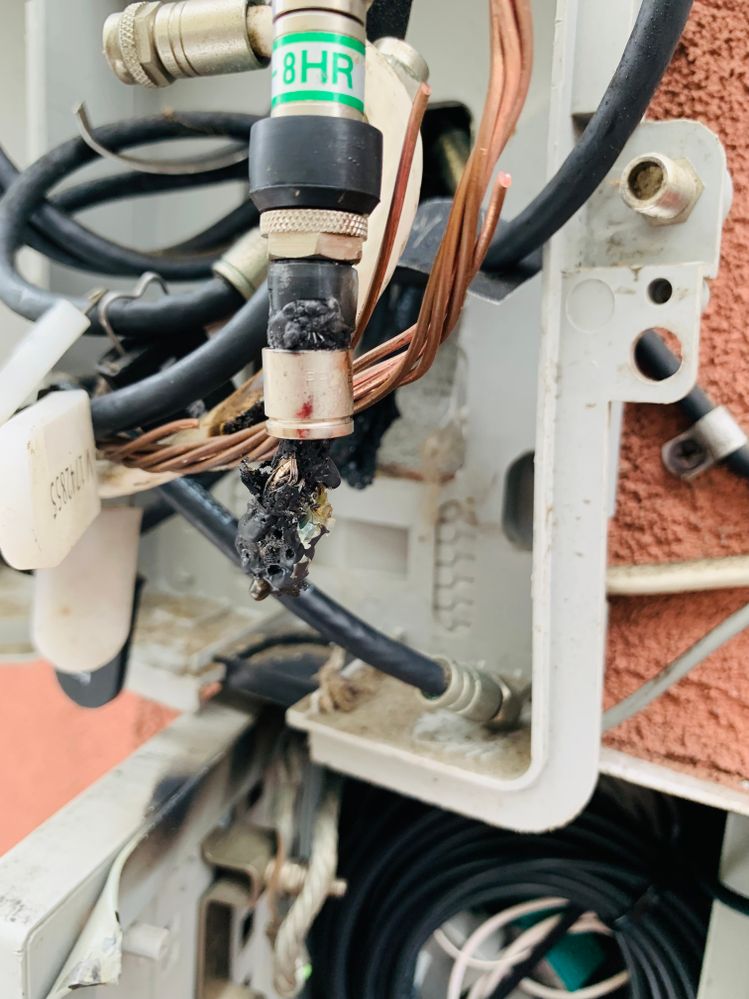 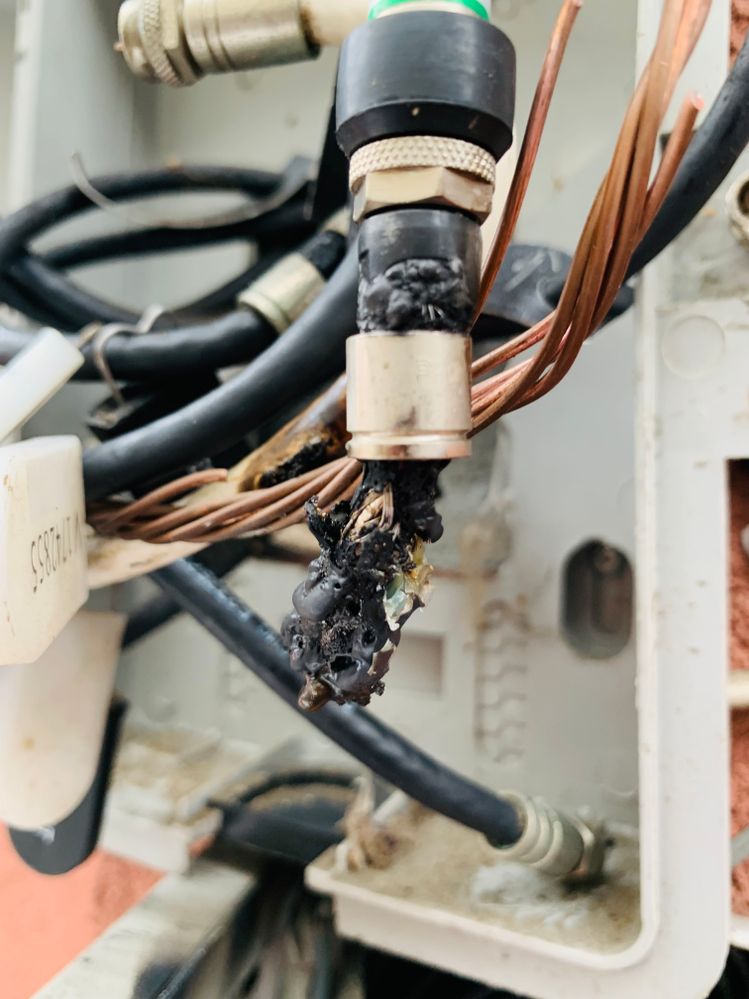 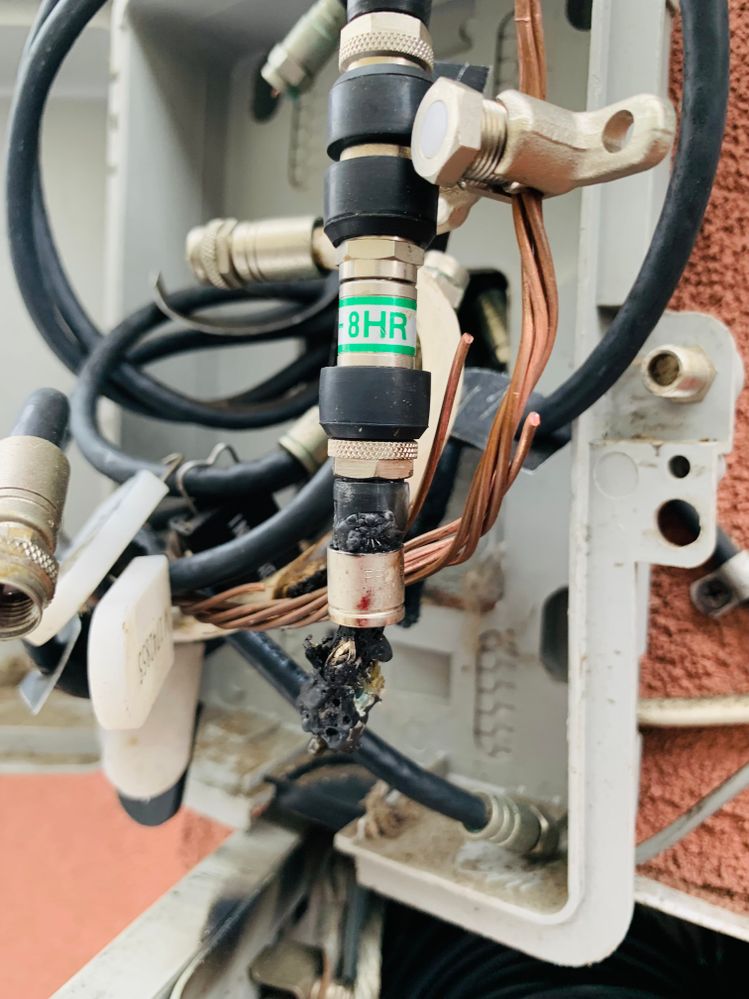 A fuse wouldn’t necessarily have to blow. The cable looks...

A fuse wouldn’t necessarily have to blow. The cable looks to be properly grounded, but can’t see what the other end is connected to. It is odd that there is an attenuator outside.

Let us know what they find.

-- I am definitely not an electrician, but this image:...

@LivingGod -- I am definitely not an electrician, but this image: 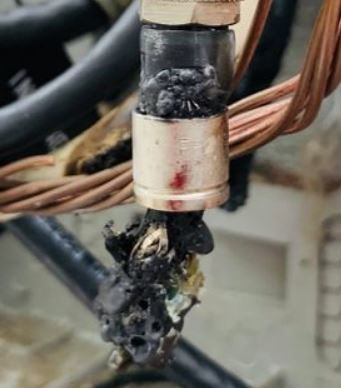 worries me, due to the (seeming) close proximity of the bare (no insulation) copper strands behind that metallic ring, especially if the demarc box was forced to close, compressing all those cables.

I speculate that some electrical power contacted the ring, causing it to heat up, and to melt the insulation both above and below the ring.

It could have blown-up your entire house real good:  https://youtu.be/uHkvD7-u7y8?t=70

Its shaw box. Only shaw cables inside. It worked for many...

Its shaw box. Only shaw cables inside. It worked for many ears. so we all hope shaw knows what they are doing. if there is issue in that box they should know. Strands are house ground.

Shaw came today and replaced box street wire and connected internet to another outlet. We still do not know what caused it. All we can do is take pic every day to see anything going on.

There is no issuse inside house. Withat much current gone to cable , if its connected house , we would have seen breaker go off. But nothing happened inside house.

It probably something with shaw side. Shaw wont say what and why happened. No body knows as of now.

Hydro checked all lines and said no issue.

Shaw business guys came and laid new cable to street and connected internet to another outlet. And shaw resident technician came and put new xb6 modem. I asked for xb7 they dont want to give and sticking their usual mantra of its only for higher end plan fiber 750.

Anyways as long as internet works and good wifi signal its all well and good.

Shaw internet was flawless last 2 years thats why i extended two more years. Not much faith in telus modems.

I hope i get some deal out of all this. But first i want internet work without anything burnt again.

So far all looking good with internet. Fingers crossed. Was happy on monday then it burnt on wednesday. So i have to wait before  i say all good to go.

Called shaw again after internet working for a week. They...

Called shaw again after internet working for a week. They also dont know what happened. House owner brought electrician after i told him they have to check as it would be dangerous if it happens again. Electrician also said there is no issue in the house.

So basically we dont know what caused.  Someone is hiding the truth for sure.