I don't have TV box, I don't need that wifi. Hitron doesn...

I don't have TV box, I don't need that wifi.

Hitron doesn't support DOCSIS 3.0/3.1 therefore 300Mbps is the max for it. I was using hitron for 4 years. Now in blue curve you can't even change DNS... Which is make sense if they utilize that box for other needs.

Genius, i just did the same. I cant believe 6 channels me...

Genius, i just did the same. I cant believe 6 channels messing with my already packed wifi area.

What solution did you implement? I'm still seeing a lot o...

What solution did you implement? I'm still seeing a lot of hidden SSID networks from my Arris modem, broadcasting at high power.

My concern is that this is requiring me to configure my hotspots on a different channel to avoid interference. I do not have TV service with Shaw, so I'm not using it for BlueSky TV.

How do I disable these, short of opening up the modem and disconnecting the antennas?

No, this is not the case for everybody. I am an WISP netw...

Not necessarily. Your other devices should automatically use a different WiFi channel, to minimize the interference from the one channel that the cable-modem is using.

No, this is not the case for everybody. I am an WISP network engineer by trade with a bunch of routers and APs and other devices at home. I very carefully manage the frequencies used by each device in my home, set statically so they won't interfere, but the XB6 is a wildcard. It seems to avoid DFS channels so it will only be in either the low or high 5GHz range. Not only that, but it transmits 13dB hotter than any other wireless AP at the same distance away in the low or high 5GHz bands. I suspect one of the earlier posts was correct, that this is transmitting much hotter than should be allowed by Industry Canada regulations, suggesting that there is a misconfiguration of either the country setting or the antenna gain for the built in antennas.

Although there is certainly much less interference when wireless radios are not being used for any active traffic, you still have beacons happening at an interval of around 100ms by default, and those beacons from the XB6 will cause interference for any other APs that are on the same frequency band. There is no magical "multiplexing" that will help with this. The OFDMA in wifi6 is really geared towards helping situations where you have multiple clients using the same AP, not multiple APs on the same channel.

Making the situation even worse is that every time the XB6 is rebooted it will reselect the frequencies and interfere with a different device I have at home, requiring that I move everything around again to avoid it. This is really not acceptable.

Disconnecting the antenna leads is not a good solution as that could blow the wireless radio theoretically if something did try to connect to it. Putting the device into a Faraday cage or wrapping it in tinfoil as a sort of poor man's Faraday cage could risk overheating the device due to the reflected microwaves, and would look incredibly stupid to boot.

Unlike other posters in the thread I'm not afraid of the "radiation" this is putting out, even though it seems to be well above the Tx power allowed by IC regulations. I just don't want this causing interference issues with my other devices as I am never going to buy a Blue Sky TV cable box.

This is not a good solution for people who have no intere...

d9amic and  I understand your concerns. To give some more context, the hidden networks are there so they can connect to the BlueSky TV 4K wireless boxes. So they will be active regardless of the modem is in bridged/unbridged mode.

This is not a good solution for people who have no interest in buying the BlueSky TV wireless boxes. There has to be a way of turning this off without resorting to idiotic workarounds like putting the XB6 into a Faraday cage.

I've had issues with this for a while. Finally bought a r...

I've had issues with this for a while. Finally bought a router and like most people with an XB6 router found HiddenSSIDs still showing.

I'm on the Freedom 150/10 plan so I don't even have TV, so these HiddenSSIDs are totally pointless.

I seem to have messed about enough that they are gone, but I need someone to try it for me first....

I turned off 5g wifi but left 2.4g on, and then enabled bridge mode. Now no HiddenSSIDs.

Can someone try see if it was this? Or something else I did whilst messing about

A "bridge" is just a bridge. In this case, from some protocol carried over the coaxial-cable to the Ethernet protocol. All the "bells and whistles" are disabled.

Hey guys did anyone find a solution for this? For anyone...

Hey guys did anyone find a solution for this? For anyone from Shaw looking at this, we are NOT talking about the Shaw Hotspot functionality. We are talking about the unnecessary interference caused by the hidden SSIDs being broadcast without permission when the modem is in bridge mode.

I may be close. Well see.

I may be close. Well see.

In Bridge Mode, at the moment I see 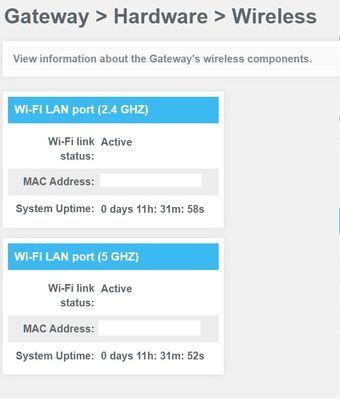 Unfortunately I still see both ports listed as "active" in Gateway > Hardware > Wireless.

But, using inSSIDer and a couple of other tools, I have, finally, been unable to detect any broadcasting MAC address from the XB7.

My settings have survived a browser un-plug and re-plug but I am not sure they'll survive the Reset.

After trying everything that I can think of there are still 5 hidden SSIDs (2x5GHz and 3x2.4GHz) active on my XB7.
5 is a strange number.

I neither need nor want them.

And, as someone else pointed out, they do not stay on the same channel, so setting up my routers to avoid those channels is impossible, at least I have seen the 5GHz on different channels at different times. So far, the 2.4GHz have been on channel 1.