I just added Crave Tv & HBO to my Shaw services.  I foolishly signed out of the app to refresh as one tech agent told me the programs from Crave & hbo would be accessible within the Bluecurve Tv app, & they weren’t showing.  I signed out & cannot sign back in.

I’ve included a screenshot of two stages before the areas to type in Shaw ID & password appear.  Are these requests before sign in screen shows, normal ?  Secondly, is anyone else having issues signing in on this app using a newer model of Ipad Pro pls ? 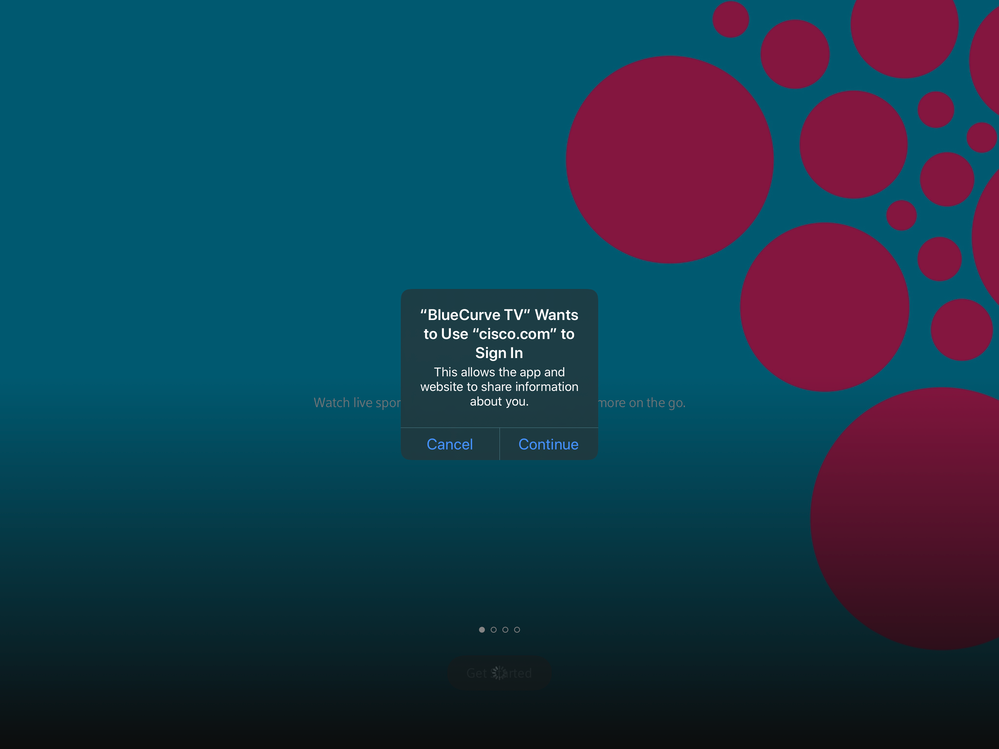 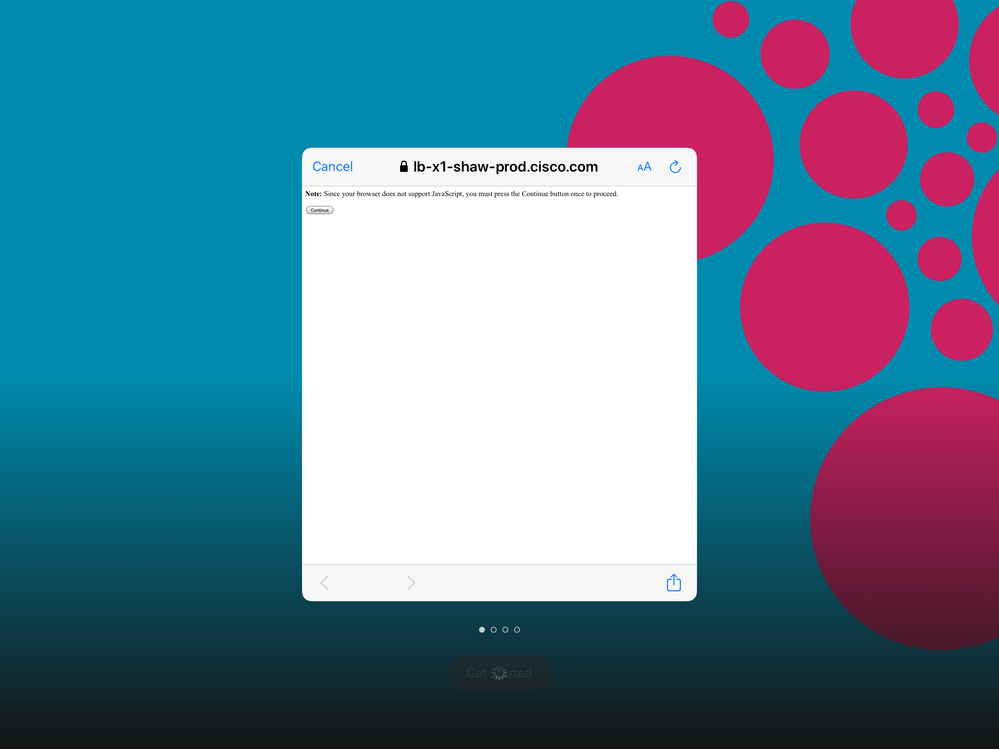 CISCO now owns the former LINKSYS company (all their netw...

Is it possible that you have enabled "VPN" (Virtual Private Networking), and are trying to connect to a VPN server on CISCO's network?

Is it possible that your web-browser has disabled "JavaScript" functionality?

Hank you for your thoughts & reply.

My VPN in settings in ‘Not Connected’.  I don’t use a VPN however again, thank you for your potential solution  👍🏼

mdk  I should add, your Cisco info re their part in the functioning of this Shaw app does help me understand why as of yesterday, February 8, 2020, I still cannot access my ‘Bluecurve App’ on ‘Ipad Pro 2017’ & as to why that Cisco pop up still needs me tp click on continue knowing they are involved.  It’s both frustrating and odd.
A Shaw Tech employee said that both pop-ups pre sign in page reveals itself, are ‘error’ messages.  Go figure  🤷🏻‍♀️

I've been doing research on browsers that still run Flash Player seeing as the Bluecurve TV app seems to need it to function as the pop-up / pre screen suggests.  A few articles on the subject re the demise of Flash Player across the board.  I hope Shaw is knowing this and working to switch from Flash Player to the other software plug-ins or 'add ons', HTML5 etc.  I don't much about it other than by reading.

I was watching my Bluecurve TV on the website on Macbook Pro & had been reading about Adobe Flash Player being discontinued by Adobe & thereby also Firefox Browser, Safari & Chrome.  An Adobe update or what I thought was an update ? , presented itself in the middle of my movie, I clicked on it and it is an 'Uninstaller' !  What ?!

I can only access BluecurveTV now on my Macbook Pro not on my Ipad Pro due to Flash Player failure & app dependency, so the thought Adobe is preparing all of us to expect a total discontinuation by December 2020 is concerning.

I hope Shaw is working fastidiously to switch over to HTML5 or some other software so we can all still access BluecurveTv online.

it's certainly odd that you are seeing that message on yo...

@Angep it's certainly odd that you are seeing that message on your iPad Pro. Are you able to access the app on any other Apple device? Also, is your iPad using the most up-to-date operating software? Also, have you set your default location for your apps to be from Canada?

Dear shaw-tony,   I can access my BluecurveTV on my Macbook Pro 2017, bought a few months after my iPad Pro 2017. It does rely on an upcoming obsolete Adobe Flash Player software & as I mentioned, as Google’s Crome app / Safari App & Firefox app cease to support ‘Flash Player’ in unison as ‘they’re movin on’, I think this may be at the root of a number of issues with BluecurveTV app and the My Shaw app.

When FreerangeTV used to exist before the Shaw update ‘switch’ to BluecurveTV,  I was always signed in consistently & would turn on ‘Location Services’ whenever in use.  Worked perfectly on iPad pro 2017, any update.

BluecurveTV App is useless on ‘sign-in’ despite location services 💯% open during a new app download and sign-in attempt, after resetting ‘location services’ on my iPad leaving ALL LOCATION AVENUES open.  No change ugh  lol

I am content provided I can access BluecurveTV on my Macbook Pro 2017 however, by end of December 2020 when Adobe ceases to update nor support the function of it’s Flash Player, I hope Shaw is onto this change as my BluecurveTV website is dependent on Flash Player presently.  Without it, I’ll have NO WAY to view my Shaw Cable channel subscriptions online.  😞

in another thread there was a conversation about issues s...

@Angep in another thread there was a conversation about issues signing in with the iPad so it may be related. As for the Cisco redirect that should not happen if your App store setup is in Canada. Are you able to test the BlueCurve TV app on another Apple device (iPhone, etc)?

As for replacing Flash when that ends, I haven't heard of any updates to that yet. We will certainly replace it when the time comes (HTML5, etc). I appreciate your feedback.

I was taking a photo with my iPod Touch where I was also having issues using the 'FreerangeTV' / 'BluecurveTV' app.  I thought I'd give it one last try to sign into Shaw's app on Ipod & amazingly, it worked !  I knew I was gearing up for another attempt with BluecurveTV App on iPad Pro 13.3.1, 2017.  I made sure the settings on Ipod were as similar as possible on IPad Pro &, after 'one more try', it worked !

My success was mostly found in settings as within Safari app there is a switch on or off 'Flash Player' & that was the error message that kept popping up, hence why I thought BluecurveTV relies on Flash Player to run / function.  I still have to test, now that I'm signed back in and the app is working beautifully as it's always done, how Flash Player actually influences your Bluecurve / Freerange TV app in general.  As it was needed to sign in 100%, will the app function with Safari App turned off on my device ?

Thank you for being willing to discuss and assist Shaw-Tony.  Very happy I'm back in on all three of my Apple devices !