We have wire mesh in some walls of our older home. The Shaw XB7 with Shaw pods does not provide good bandwidth to parts of our home so BlueCurve TV on wifi is not practical. I see others posting with similar issues. 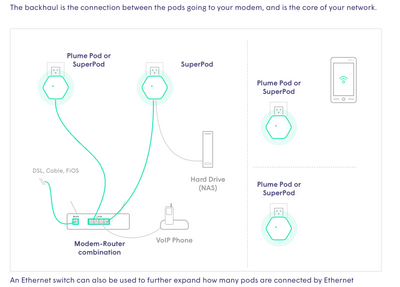 @tc10  Plume makes the Shaw pods. They support Ethernet, so I don’t see why they wouldn’t work.

Interesting as they have wired backhaul which I need die...

Interesting as they have wired backhaul which I need die to wire mesh in some interior walls. Who can I ask? Or just but & try?

”The Plume SuperPods are Wi-Fi boosting units from a company you've likely never heard of. Plume is a US-based company that's worked mostly with service providers in the US and Canada, including Comcast and Bell Canada. ”

“Many of you have been writing and calling about when Plume would be in Canada.

Well, Plume is now in Canada. We could offer you Plume directly, but it’s a much better deal through Bell. If you’re in Bell’s territory, you’re all set. If you live outside of Bell’s territory, no worries… stay tuned”

Shaw pods are made by Plume, the same ones that Comcast s...

@tc10  Shaw pods are made by Plume, the same ones that Comcast supplies and are only Wifi. The model that you want should work fine, they just need an Ethernet connection to the BlueCurve.

Contact shaw directly…have a chat with them. They can ans...

Contact shaw directly…have a chat with them. They can answer your questions.

Plume Pods are the ones you will find on Shaw and Rogers...

Plume Pods are the ones you will find on Shaw and Rogers networks aligned with Comcast’s internet system. I have been using them on Shaw’s Blue Curve system without event for a few years. There is a WiFi 6E version comping down the pipe soon.