Before we start: I would like to thank the team over at Shaw, for helping me with my concerns even though our problem has not been resolved.

Please also consider that I have background in cabling and I know a thing or two about signals, servers, wireless communication and networks.

I would also like to express that even though I could publish this on my own blog or websites such as Reddit, I choose to publish it here first to hopefully come up with a solution.

The Story:
We signed up for the Shaw internet 600 package a couple of years ago and It was working fine for the first few months, but then I noticed it was getting slower and slower. So I decided to contact the tech support team about five, six months ago. The gentleman/lady tried my modem signal level and everything and asked me a couple of questions. Long story short the speed problem resolved for about a month and then all a sudden the same thing happened. So naturally I decided to contact Shaw Support again and this time they sent down a guy to check on my cables and took out the extra cables and switches from our junction box and tested everything and then left. Again, it was good for about a month and all a sudden our speed dropped again.
Long story short I have noticed that my speed varies when using different type of connections for example, even though my ping is very good, I get extreme drops and ping results in video games, I have no problem surfing websites but it seems that my YouTube videos are having problems loading. It goes the same way for different services. What I'm trying to say here is that I am losing speed depending on the service that I am trying to use, so I am suspecting some sort of Packet Inspection happening at Shaw Communication Servers. Now, this is not an allegation, I am just assuming based on tests.

I contacted the support again but this time the gentlemen is telling me that I can't really test using other servers because they don't know what is going on with other servers and to my defense I have mentioned that test my connection to Shaw Servers is not representing real world scenarios. His point was that because Shaw does lack control over other providers then it can't confirm their speed and my defense is 1. I don't think companies like AWS, Google and Microsoft need to limit their connections to Shaw Servers and 2. In counterargument, I could (not that I would) claim that Shaw is using this argument to be able to bottleneck its client's connection when they're trying to reach outside servers; so Shaw can claim some really high speeds (Internal Network) but won't be able to offer the same speed for real world scenarios.

I contacted Shaw Technical support a couple more times but the results were the same so I started to run my own test today.

Test method:
1. Running Speedtest to both Shaw servers and other servers on bot GUI (Website Client) and CLI (CLI Client).
2. Downloading couple of big files from different websites (Github, Ubuntu etc.) over both wired and wireless.
3. Determining my internal WiFi speed.
4. Downloading files from my own VPS in Oregon/USA with zero other users.

Clarifying:
Ok, before I start explaining I have to say that I am getting roughly between 180mbps to 300mbps (22 to 37 megabytes per second) on my WiFi and WiFi is not my priority here. 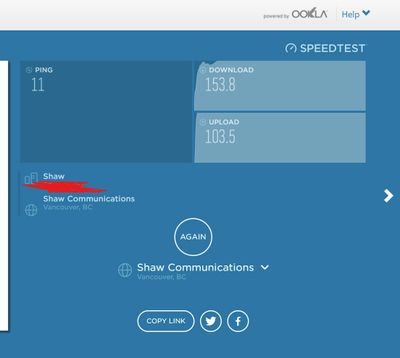 WiFi test from Speedtest to Shaw and other servers: 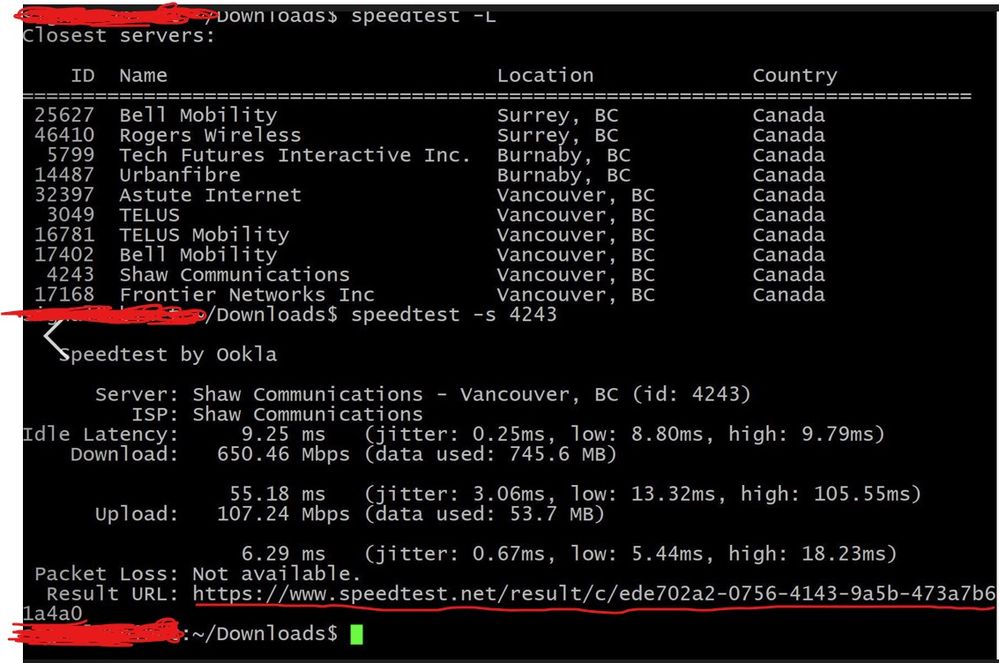 Testing using my own VPS:
Ok at this point I am seeing very consistent results despite using different methods and I am confident these results are enough for my test but for confirming one last time I decided to setup a dedicated remote server, upload a file into it and then download it with my own system to see if there is a difference between public and private server performance. Please note that I deleted the server after I was done with it. 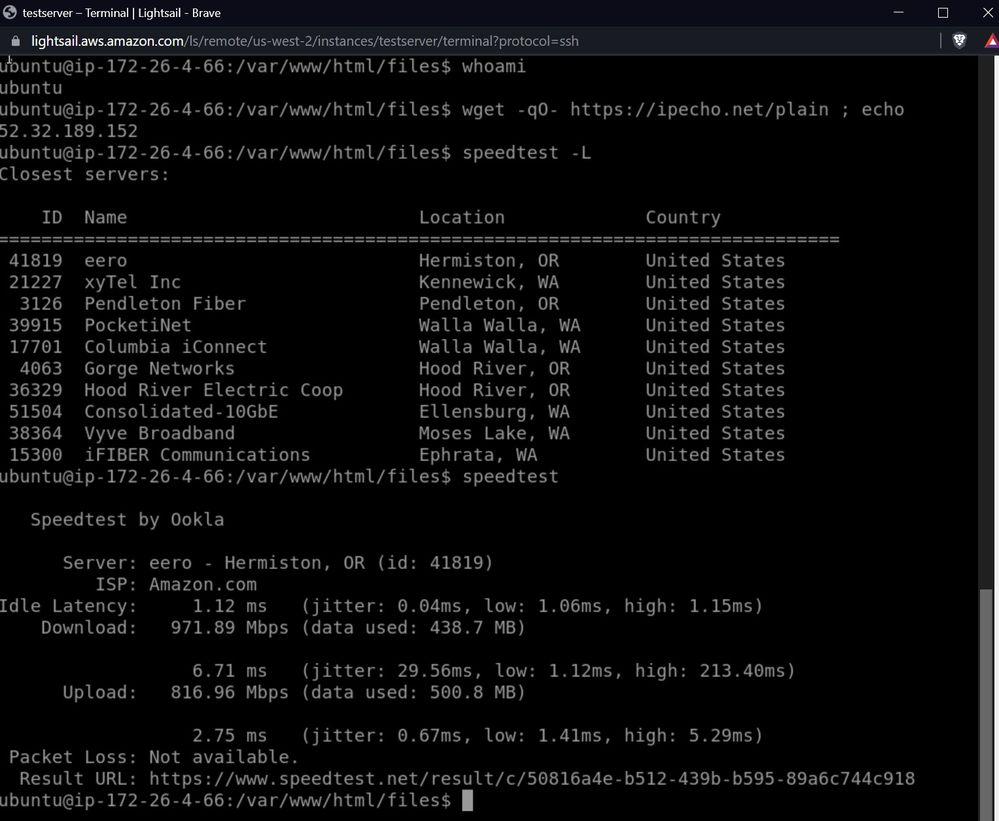 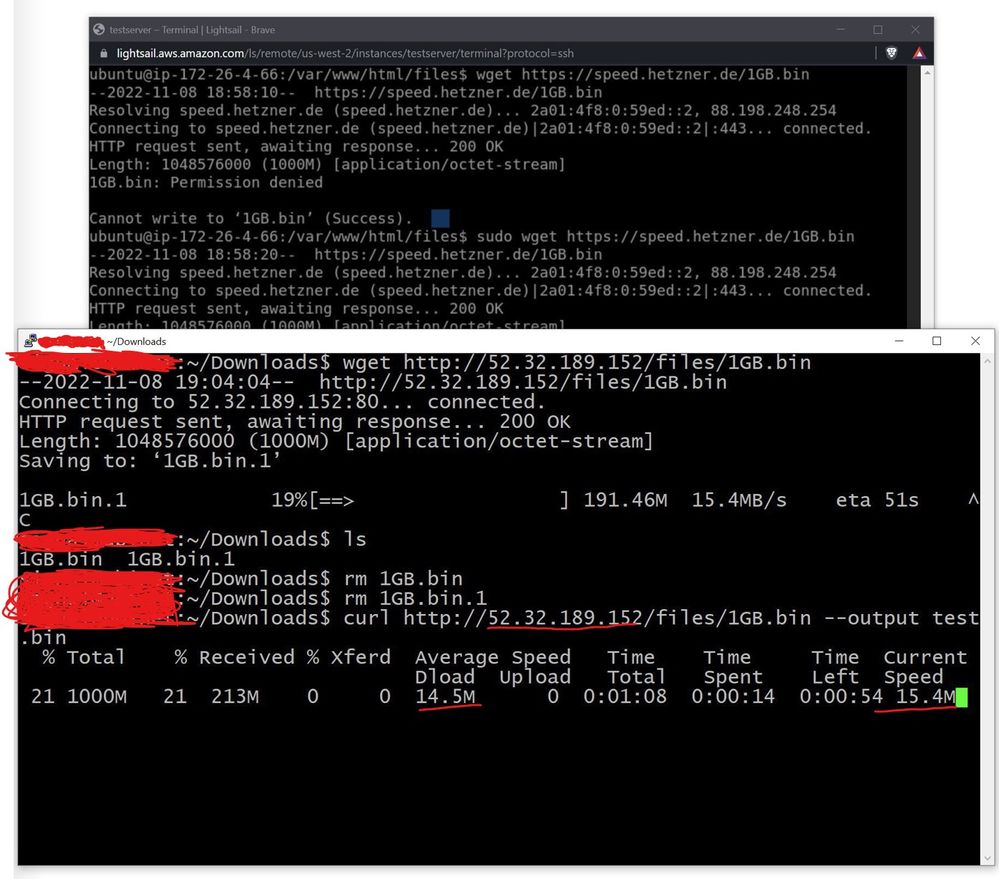 My conclusion is that as much as I hate to say it, but I am getting roughly close to 150mbps speed rather than 600mbps that is mentioned in our agreement which means we're getting 1/3 what we paid for in the last one year and so! At this point we're considering moving to the competitor as they offer fiber for almost the same price (and we'll see how things go with them).

Please let me know if there is a solution to this problem or if you're experiencing a similar problem.

Labels (2)
Labels
0 Kudos
2 people had this problem.
Me too
Share
Reply

Hi  , no such problems here, I consistently get over what...

Hi @element3 , no such problems here, I consistently get over what I pay for and that's for upload also.  Maybe someone on here has some idea's for you to try, you should at least get what you pay for.  So many things can affect it, such as a bad cable some where in the setup, a loose connection somewhere in the setup, could be a failing network card, or maybe using Cat 5 instead of Cat5e or Cat6 internet cable line.  I hope it can get straightened out for you.

You are lucky you get over 100 MB I get 82 and I just signed up for their FIBRE 1GB plan for 2 yrs. And I have a CAT 8 cord, brand new computer and a modem that specs at 10GB. They dont tell you that yes you could get 1GB if your house was wired for FIBRE. So I would probably have to upgrade my copper cable wiring to FIBRE. SHAW needs to check an address before signing a person up to a 2-year plan. They say well hitch up more computers to your modem and they will all speedtest and that same speed. I only have one computer. I am going to have to sit on hold for three hours to get them to change my account back to a lower bandwidth since I am getting only that anyhow.

i don't think you be able to downgrade once you on a new...

i don't think you be able to downgrade once you on a new contract. i think you can get value plan acceped plan of fiber 75 or higher.  i could be wrong.

@dwkish -- They dont tell you that yes you could get 1GB if your house was wired for FIBRE. So I would probably have to upgrade my copper cable wiring to FIBRE.

There are several inaccuracies in this statement.

But, if you are using Shaw Internet, you already have coaxial-cable from the telephone-pole into your residence, feeding your Shaw TV box, and feeding the Shaw cable-modem.  Shaw does not use twisted-pair copper-wires for that "last-mile".  Yes, at the centre of a coaxial-cable, there is one copper wire, not a "pair" of wires.

Also, Shaw describes their Internet service as "Fibre+" -- different spelling, and an acknowledgement that the "last-mile" to your residence uses coaxial-cable, while most of their infrastructure uses fiber-optic cable in your town/city.

As to "downgrade rights", you can downgrade to a slower speed. There is wording within your two-year Value Plan that defines a minimum level of speed.

I recommend that you contact Shaw (1-888-472-2222) and get the Shaw Agent to remotely logon to your cable-modem, to check the "signal-levels", and other values, to look for any problems with your connection.

Hey, I get mixed results also when using Linux. We use se...

Hey, I get mixed results also when using Linux. We use several different operating systems in our house (Ubuntu, Kali, Windows, and IOS) plus gaming systems (Playstation and Xbox) plus various other devices that run apps such as Netflix. The only problems I run into is with Linux and sometimes Playstation (when downloading large games). The Playstation is using WiFi so this is the problem since it is much faster when hardwired to router. All other devices get good download/upload speeds through WiFi. The problem seems to be with Linux -> if using FireFox as your web browser.

My Ubuntu computer doesn't use a GUI so always use command line. On the Kali, I use FireFox and can never get the speeds I am paying for; usually between 1/3 - 1/2 (half if I am lucky). It doesn't matter what online speedtest I use - Fast.com, Telus, Shaw, etc.. However, when I run speedtest in the command line, I will consistently get between -50mb/s to + 25mbs of my download and from 15mb/s below to 5mb/s above for my upload.

So, from your cable-modem to Shaw's server in Vancouver, you are getting about 650 Mbps for download, and 100 Mbps for upload.

Do those numbers match what is in your Shaw contract?

>  I have noticed that my speed varies when using different type of connections for example, even though my ping is very good, I get extreme drops and ping results in video games, I have no problem surfing websites but it seems that my YouTube videos are having problems loading. It goes the same way for different services.

Compare driving from downtown Vancouver to SFU Burnaby -- you get "full speed", unless there is road-construction on the roads -- to driving from Vancouver to Kelowna -- all the highways were washed-out in November 2021, and there still is ongoing repairs, and one-way flagger-controlled traffic and reduced speed limits.  The same difference applies when you try to connect to web-sites that are geographically far away (Microsoft's servers in Washington State, and Google's Youtube servers in California). There are bound to be "bumps" in the routes that your Internet traffic, along many segments.

I see packets going through Shaw's "cross-border" router to WA(shingon state) and ending-up in SEA(attle) on a Google server -- YouTube is owned by Google.

Those routers are "high-capacity" -- certainly, they are not "bottle-necks" along the path to YouTube.

However, such fast routing is only one factor. Your video-experience also depends on the YouTube file-server being able to "push" out data to thousands of simultaneous end-user computers, including you; such a lack of capacity is the reason for "jitter" and "buffering" while you are watching a video-stream.

> I am suspecting some sort of Packet Inspection happening at Shaw Communication Servers.

I disagree. I think that Shaw's routers just "route", and those routers/servers route as fast as they can.

It downloaded at a maximum of 10.9 MBytes/second - according to the download reporter inside Microsoft Edge.

Via Windows "Task Manager", I could see that it was downloading at 100 MBits/second.

So, your download is limited to the speed of the network-connection between that computer ("download.g0tmi1k.com") and the Internet, which seems to be 100 Mbits/second.

It is possible that the owner of the computer has 100 MBit/second Ethernet service.

So, despite your "fast" Shaw connection, that server is only sending data at 100 Mbits/second.

It is 1000 MB in size.
I downloaded it at about 1470 Kbytes/second, according to Microsoft Edge
Windows Task Manager shows it downloaded at 13 Mbits/second

The trace shows a "lag" between New York (USA) and Nuremberg (Germany).  That is expected.

So, no matter what speed Shaw is giving you, that site in Germany is not sending at that speed.

namely the "Elastic Cloud" by Amazon.